Michael Bolton wrote a piece in response to my previous blog post, 'Software Testing: I don't just 'break stuff'.'' You can find his post here -  'What Is A Tester?' (Developsense Blog, 25 June 2015).

His blog post has given me a lot to think about. I know now when I'm next faced with the question: "So you just break stuff all day, eh?" I'll be thinking about using those metaphors - I'm a research scientist, an explorer, a social scientist, a tool user, a critic and an investigative reporter.

But today, I'd really like to focus on the explorer metaphor.


Bolton writes: "I start with a fuzzy idea of the product, and a large empty notebook. I treat the product as a set of territories to be investigated, a country or city or landscape to learn about."

Thinking back to my first testing experience, I could safely say that Dora the Explorer would have put me to shame. I was nervous on my first client site, people spoke a lot of 'tech' with their superior domain knowledge and I'm ashamed to admit it - but despite being taught some great techniques from respected, experienced testers - I was tentative in my exploration of the large and complex system.

First day nerves definitely got to me. And it actually extended out into a week or two before I really settled into the groove of things.

One of the biggest traps I fell into as a newbie was feeling overwhelmed at how much I didn't know. Once I finally felt like I understood something, I would get tunnel vision by focusing on that tiny fragment of the system.

Put simply, I needed to think about my testing in context. I was focusing on understanding my findings but not seeing how my piece of testing sat within the whole.

I found myself thinking back to my favourite childhood picture book - Zoom, by Istvan Banyai. 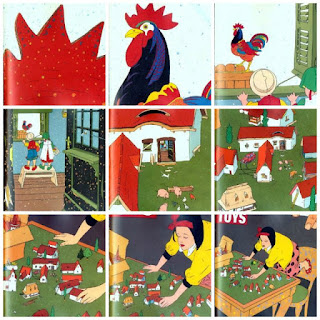 Banyai's illustrations reminded me as a fresh tester not to think about my testing solely as the picture on the top left. My area of test was a part of a complex software system that runs through a number of processes on a cyclical basis.

Some thoughts that were triggered by thinking about Zoom:

Now that I'm a little further along from my 'first experiences' as a tester, I've re-evaluated and come up with more questions to think about:
These thoughts may be amateur - but I would have never thought that a picture book I enjoyed as a primary school student would have such a lasting impact on me, especially on my career. In a weird way, the book has helped me become a better tester, a better explorer.

In the past year I've had extremely interesting (and often amusing) conversations with people who have a lot of questions about my day job.

Here are a couple of classics...

The most common type of conversation I've had. I'm talking about the young professional, the fresh graduate who doesn't work in the IT industry, but who understands software (well at least the software they use in their finance/insurance/banking/medical jobs) and who also understands basic IT concepts.

Or, along the same lines...


"So... do you just think about stupid stuff that a user might try and do, and then try and see whether the system lets you do it?'

Ahhh, if only it were so simple. I'll admit that I wasn't the best at describing a software tester's job. I think this is because our roles as testers change so often, depending on the type of project, team or environment. No two days are the same, well at least not for me anyway. So it was really hard for me to explain what I do on a day-to-day basis.

So now when I talk to friends, I'll talk about how software testers can work together with businesses to build quality into the software development life cycle, which means ultimately delivering better software. And while it does involve trying to "break stuff" sometimes, that's definitely not the only thing we do.

I'm not entirely sure they're convinced though.

...who is the cutest. Technology is definitely not her forte.


"You work in IT now, so you can fix my phone? Can you tell me why my app won't open? How does this anti-virus thing work?"

...who is a grandmother. She got her first smartphone last year.

I don't code. I'm trying to dabble in basic coding, but I don't know how to code at all. This didn't seem to sit well with her, so after several attempts I finally got her to understand software testing by using a very loose analogy about building houses. So 'the business' (or the person who wants the app) is sort of the equivalent of the home owner, and a little bit like the designer/architect; a developer is the builder, and a tester is the building inspector. And we're all trying to build a software 'house'. A bit crude, but she got the gist of it.

But I also mentioned how in an ideal world we'd all be working together from the start, and I'd be able to point out the flaws in the architect's plans before the building got started. :)

Yep, it sure is! How cool would that be?

A great explanation that my colleague had used for younger kids was how we're 'detectives' looking for 'bugs in the code.' I love this!

Ten things I learnt in my first year of software testing

I'm one and a half years into my software testing career - and it's been the fastest year and a half of my life. Here are ten things I learnt in my first year of testing:

1. The global software testing community is huge, and hugely inspiring.

2. Communication skills are crucial
3. Asking the 'dumb questions' early on can save a lot of pain later
4. Testing is a creative process
5. You can't test it all
6. You can learn from everyone around you
7. Coming from a non technical background is not a disadvantage
8. Being open minded and showing that you're willing to try new things is key
9. Everyday I learn something new (no joke)
10. And finally, delivering a piece of software that works (or improves on existing functionality)  is super rewarding and feels so damn good.
Posted by A Junior Tester. at 10:00 PM 8 comments:

A Junior Tester.
New Zealand
Just a wee spot where I thought I'd document my testing career from the start - will be interesting to see how my opinions change over time.